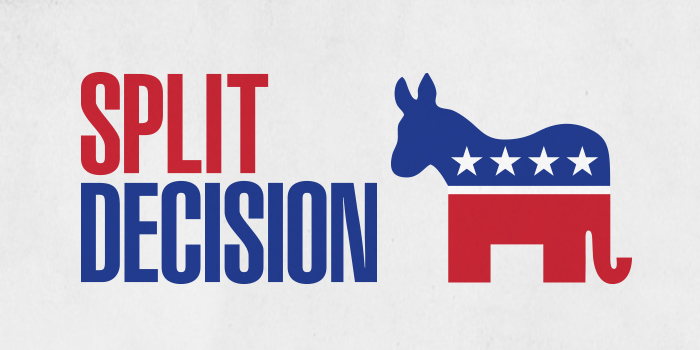 A channel stunt with a group of recent political documentaries, was planned to air during the run up to the November 2012 Presidential Election. A  wrap-around concept was needed that would engage viewers and allow different political conversations to be aired.

Fact: in 2012 the USA was at its most politically divided with the exception of the civil war…How could this subject matter be woven into a theme month?

Thinking about the political climate, I wondered if the 2012 election might have all the signs of being a tie. I originated a number of titles around this theme, with “Split Decision” being picked by the client. I find that brainstorming a title can be a great way to originate concepts. Titles need to be pithy and journalistic to grab attention.  “Split Decision” is actually a boxing term for a situation in a fight where there is no clear winner.  It occurred to me that the party-political animal symbols could get the idea across of the spilt (the Republicans use the Elephant and the Democrats use the Donkey). I like duality in graphics and I found that by creating a visual where the two creatures merged could be a very simple and direct way to represent the idea of a tie. This graphic showed the opposing political animals being pitted agains each other and charging towards each other to form the hybrid ‘elephonkey’.

The team at Participant media loved the concept and it helped drive the audience to the films by adding some colour to what could have been a more conventional solution.