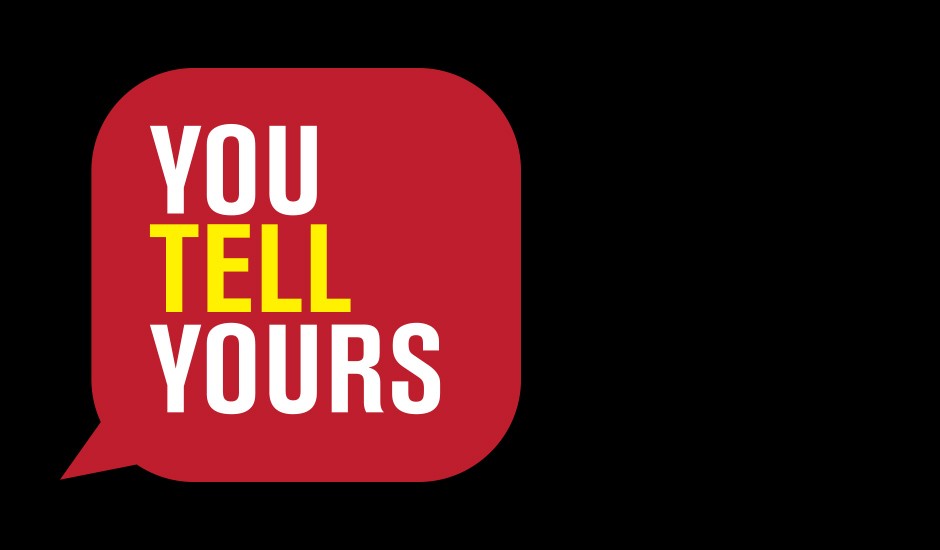 You Tell Me Yours is a story-telling class that helps novices develop public speaking skills and learn to craft a short personal experience into a spoken story.  My client was looking to expand their business from one focused on  entertainment into the corporate world and wanted to have a logo that would give them more credibility in that arena.

For me branding starts from the logo. The existing logo wasn’t really working well as a component in the overall branding scheme. The logo is usually a building block in defining elements which become part of the visual collateral of a brand. The original logo version was trying a bit too hard to be meaningful by using the name as words emanating as “speech” out of a head. I felt there was a better way to do the same thing in a more concise and simpler manner. I have come to the conclusion that simple and direct is often best. That’s what Martin Lambie-Nairn told me last year and he’s the leader in this field…

Storytelling is about speaking in public. It’s a personal narrative that’s spoken and live. In comic books and instant messaging a speech bubble is commonly used – sometimes there’s a reason why these devices are used by designers. For a company that’s selling courses to articulate the telling of a story in front of an audience, it’s a very fitting device as it conveys the idea of speech in graphic form.

The speech bubble is a strong device that also lends itself to adaptation. As a shape it has many forms and is easily understood. It’s visual metaphor that brings a sense of the spoken word.

Then there was the question of the name, You Tell Yours. Sometimes the use of a particular typeface can bring gravitas and authority to a logotype. I wondered if a humanistic style of typeface could bring some of that feeling. After looking at a number of typefaces that fall into that category, what was needed was a typeface that had authority but did not draw too much attention to itself. Typefaces are a little bit like people, with personalities. As the company is looking to broaden it’s reach to business I felt that something a little more sober would work. Berthold Akzidenz is a font family that has numerous weights and styles. I settled on the condensed version as it allows the words to become more compact. It is also a font that is similar to a declamatory headline in a newspaper. By stacking the words of the name, a compact mnemonic block is formed in a shape that is easy on the eye.

Adding a visual property in conjunction with the name, in the form of a speech bubble, provides both a graphic container for the mark and becomes a flexible branding device. I set about drawing speech bubbles- everything from a cartoon style to more esoteric renderings. I started with shapes that conform to ovals, then rectangles like a tv screen, but settled on a rounded square shape -this was better suited to the shape of the stacked words and works well for social media applications, a big part of the brand’s outreach.

Adding a tail to the rectangle creates the speaking connection. The placement of this can give different qualities. I settled on a corner postion using a cone shape. There can be variants where the position of the cone is positioned to allow for the ’speaker’ being in a different area of the ‘space’. Most of the time the cone will be in the bottom left corner.

This project is case in point of not overthinking a logotype – it needed to be simple and direct and play well with digital platforms.