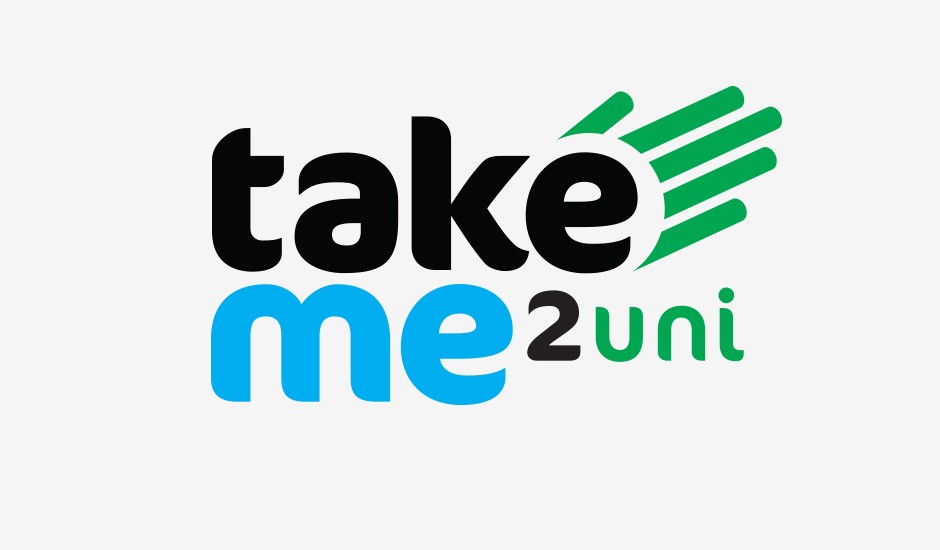 My client wanted something that spearhead his marketing and help develop his brand.

I initially explored visual ideas that related to using directional motifs and modes of transport and tried to integrate them with the name. However, I realised that this solution seemed rather ‘pedestrian’.Looking at the competition in the same market, use word-marks. They tend to revolve around one or two word solutions.  I felt it best to avoid the branding approaches which often use ‘trendy’ type faces (as in the case of Lyftt) which lose legibility in small sizes. As “TakeMe2Uni” states its mission in its name, I focused on solving the deign problem of a long name and finding to organize the words in clear and legible way. I also wanted to introduce a visual property to give more personality to the branding.

I began to think of visual metaphors for travel and more importantly, of aspiration. As going to university is a milestone in a parent and child’s life, there is an emotive aspect to the departure and the destination.
Is there a way we could bring a human element to the brand as opposed to focusing on the transportation? Can the brand work to ally fears about this big emotional step ?

Sometimes the use of a particular typeface can bring gravitas and authority to a logotype. Trust is an important value in parenting and I wondered if a humanistic style of typeface could bring some of that feeling. After looking at a number of typefaces in that catergory, I settled on Cocon, a typeface with name using the French word for cocoon. The typeface is certainly friendly and legible in small sizes with round edges and feels like it was made with a brush. The name suggested a direction…

The metaphor of a cocoon seems very fitting as a vehicle for a child about to move out of the family home and into adulthood. I decided to explore a butterfly motif as a visual metaphor, but came to the conclusion that it may have a too feminine an association (often being used for female cosmetic or hosiery products). I felt that a visual directional aspect was more to the ‘point’ but I wanted to avoid arrows which are very overused.

I then looked at the name to see if there was a way to arrange the words in a legible way. As there are a lot of characters I wanted to use a hierachy of sizes to put emphasis on the words and to make the name easier to digest. Justifying the words ‘take’ and ‘me’ to the left brings symmetry to the letter e which are immediately above and below. I wondered if a visual property could be introduced to bring more of a human touch to the mark?  It occurred to me that a pointing hand (a device used on old signs in railway stations) might combine both a human and directional aspect. I quickly came to the conclusion that it felt a little authoritarian. As hands are expressive, I wondered if another hand formation might work. I finally settled on an outstretched palm, as a guiding hand. By orienting it upwards, it would become a friendlier directional hand.  Consequently, the logo had a much more expressive quality and translated well into digital platforms where it will primarily be seen.